The early founders of the ‘agile movement’ we’re just people who had been involved in solution development and just spent time thinking about how they could do their jobs better.  They spoke plainly and tried to use basic concepts that could guide their decision making and be repeatable.

Often in our daily lives we will tend to try to make ourselves look ‘smart’, ‘sophisticated’, ‘technical’, ‘innovative’ and so on.  usually to do this, we end up sounding like a lawyer or a professor from university.

On a recent trip, I had a chance to speak to farmers from another country.  In the US, we tend to see farming as a science now.  We use chemicals and computers and computer modeling.

As I spoke with these farmers they told me of how important weather was to them, and their planning.  The weather, or bad weather, could risk crops, animals and harvests as well as have negative and ripple effects on other planning.  In fact, they spent so much time telling me about the weather it was easy to see this information was extremely important to them and they would not risk getting it from a trusted source.

Interestingly, as the weather report came on the radio in the shop I was in, I noticed no one paid attention to the radio broadcast.  I found this really odd, as a tourist I was very interested in the weather too, and while I strained to hear and understand what was being said, they went about their business. 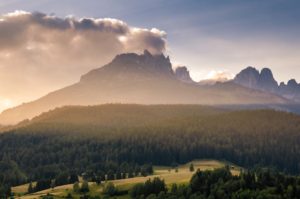 I asked the shop operator if he could help me by explaining some of the terms used in describing the weather better.  The operator, in a heavy accent, said ‘Nye’, if you want the weather accurately don’t listen to that ‘Uni’ TV guy, call up the postman.

Without a translator, I felt lost.  Why would I ask the man who delivered the mail about  the weather?  Did he get some special piece of information possibly controlled by the government to ensure mail delivery?  Was this kept secret from people who’s lives and livelihoods depended on it?  Why weren’t these farmers annoyed and alarmed?  It was very confusing.

As I returned to the tour bus I asked the local guide about this odd conversation.  The following is how it was explained to me, without the heavy accents and as little folklore as I can use!!

The local farmers had for years complained about the weather reports in the area.  They had become so frustrated with the accuracy that they even tried to remove the weatherman on the ‘telly’. He used to ouch science and words to make simple things complex and accuracy and precision were lost as he tried to impress with his explanation of ‘how’ weather was forming rather than getting the predictions correct and timely.  This problem lead to the ‘need’ for someone to step in and solve this problem.  Enter the ‘Postman’

Every day, after dropping the mail, a local man would go home and consult several pieces of information and create a file for the next day.  The file predicted sunrise and sunset, chances of rain, El Niña, La Niña  etc, winds and interestingly the tides, and predicted time times, as well as previously reported reports for the dates and accuracy of the reports.  Lastly of course was the high and low temps.

This man was not university educated, but rather spent time improving his craft through basic plan, do, check and adjust cycles.  Over time, he had become a local celebrity.  His passion for accurate weather reports, and experimentation with his own beliefs about what impacted weather lead him to form his own set of experiences and learnings.  He didn’t allow what he had been taught to always direct his reports, but instead spent time continuing to learn and adapt this thinking.  The goal was not the report, the goal was improving his own accuracy, incrementally, over time.

As I listened to the story I thought how agile of this man.  He took his simple principles and followed them, and then applied the data he had to make his next set of predictions about the outcomes.  He then recorded the outcomes, made notes about how his predictions had come out, then add any adjustments he felt necessary, repeated the process.  Maybe that is really Agile, not agile.

What is your experience? Are you being asked and are you doing, the right thing, right?